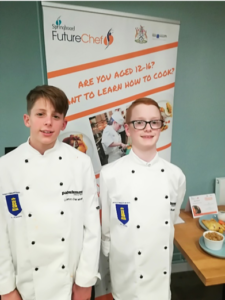 Pictured left to right, Lorenzo Baranello (aged 14 years old) and Ashdon Bailey (aged 12 years old) were each required to cook their own two-course meal consisting of a hot main choice and a hot or cold dessert.  Feeding two people, their budget was £7 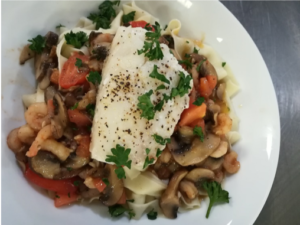 Lorenzo commented:” It was really tough, but I loved using my mum’s recipe to make fresh pasta”

Ashdon’s mum works as a cook in Worle Community School, but both student chefs were mentored by the School’s Executive Chef Manager Andy Davies.  “I am so proud of Lorenzo and Ashdon, Whilst Ashdon may have a mum working in the school kitchen, he devised the recipe by himself.  The school has been really supportive, and I hope there will be more budding chefs next year” said Andy.

Principal at the school, Miss Jacqui Scott, said: “We promote the very best in effort and resilience in all our students and Lorenzo and Ashdon demonstrated those skills so well in this competition.  This is very much about teaching life skills, building confidence and promoting healthy eating – well done Lorenzo and Ashdon”